Bitcoin Hash Ribbons Printed a Buy Signal. But What Does This Means?

We all know that there is a huge market for buying and selling cryptocurrencies and that many people make and lose money on these plays. Those who win usually use various devices and indicators to understand the market and be able to predict the next movements, and one of the main and most reliable indicators to buy Bitcoin is the Hash Ribbons. That is why, we at IBC created this article, so you can a greater knowledge of how to invest in crypto.

Before understanding what is that indication, let’s get familiar with a few concepts

What is Bitcoin Hashrate?

First of all, we must mention that this indicator is very important. The hash rate is a competition that can mean an income of more than 10 million euros per day, allowing you and not other people to mine a block. For this same reason, there is a fierce struggle, reserved for very few, to obtain devices that have an increasingly optimized and faster calculation.

At the beginning of the article, we explained that the hash rate “indicates the amount of computational operations that a miner or the network of miners as a whole is capable of performing”. Viewed universally, the concept is correct. But in the world of cryptocurrencies, this concept is insufficient to explain what hash rate really means.

Sound complicated? Perhaps, but it is only necessary to expand the vision and scope of this concept a little more. And that’s exactly what we’re going to do now.

The hash rate as an expression of a miner’s power

First of all, mining a bitcoin requires a computer or electronic device capable of resolving SHA-256 hashes. This is because the PoW Bitcoin protocol uses this feature for mining work. In the early days of Bitcoin, a simple computer was sufficient to quickly resolve the system’s SHA-256 hashes.

However, today and due to the dynamic complexity of this task, it is practically impossible to mine bitcoins using a simple computer. Because, to generate a hash that meets the specification, it is necessary to test trillions of nonce, a very complex work. As a result, nowadays getting the hash of a valid block has a very high mining difficulty. So, to succeed in this task, you need specialized hardware like ASIC Miners.

Thanks to the above, we can get our first glimpse of the hash rate concept. In this sense, we can define

“The hash rate refers to the computing power of a cryptocurrency miner to provide solutions based on a specific cryptographic hash.”

At this point, the hash rate concept is used to show the potential of a miner. However, there is another usage where the term hash rate is also important as we will see below.

The hash rate as an expression of the power of a blockchain network
As you know, the Bitcoin network is made up of hundreds of thousands of miners specializing in this task. Each specialized miner is thousands of times more powerful than a computer to resolve SHA-256 type hashes. But the best thing about all this is that the work of all these miners adds up. All so that your network set ends up offering superior power that allows you to resolve SHA-256 hashes faster.

With this, we have our second definition:

The hash rate refers to the overall ability or power of a cryptocurrency’s network to solve cryptographic puzzles resulting from the Proof of Work and the implemented cryptographic function.

With that in mind, we can now understand how Bitcoin Hash Ribbon works, so

What is Bitcoin Hash Ribbons Indicator?

It is a reliable indicator created by Charles Edward. This indicator works by taking into account the Bitcoin hash rate. This means that the indicator calculates the total computing power used in the mining network and the greater the number of miners engaged at the moment, the more the hash rate goes up or down. 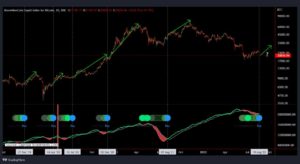 Hash ribbons serve as such an effective and historically accurate buy indicator for bitcoin because it uses the changes in bitcoin hash rate to measure miner capitulation in the bitcoin market. This means that the hash rate is starting to come offline, usually as a result of stress in miner incomes impacting profitable operations. Historically the hash ribbons provides a good indication of when to buy on spot but not necessarily as a trade. Of the previous 11 signals price has not normally dipped back below that buy point in 10 out of 12 or 13 signals. Exceptions were covid dump March 2020 and recently we saw the signal that fired during the bull run at 19.4k fail as the price dipped to 17.6k. Covid dump failed entirely as a signal and went straight back into capitulation. Understandable. And the signal that fired in December of 2020 at 19.4k ish saw prices lower in this dump. Good signal. But has exceptions since we are living in exceptional times. High inflation, high prices for commodities, Worldwide economic capitulation /recession, and war.

The Hash Ribbons indicator works with three warning signals, which automatically lit up when miners started shutting down their machines. Are they:

Miner capitulation signal: at this point, the hash rate starts to decrease as miners give up mining. It is an indicator that the rate is falling precipitously.

End of miner capitulation signal: this is when the rate recovers and goes back up again.

Bitcoin Buy Signal: This warning signal is only triggered when the moving average of the Bitcoin price in the last 10 days is above the average of the last 20 days. In this case, the buying impulse becomes positive.

How the today’s Hash Ribbons Buy Signal may affect the current market?

With the explanations above, we can expect the Bitcoin bottom to be close, but not that it has already reached it, in this way, we expect to see Bitcoin make a bullish rally without major downward corrections, the famous “buy high and sell even higher”.

Want to know some of the bleeding edge marketing techniques we use? We offer free crypto and non crypto growth hacks every week!

SEND ME
No, thanks
X